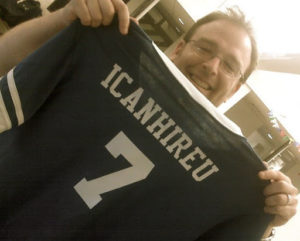 I have a fully conscious bias that there is nothing more important for a company than being able to recruit & hire effectively and with purpose. This is true at any size and stage, but especially true early on, because your first 25 employees are 10x more important than your next 250.  As you can imagine (and as you have probably encountered) culture, hiring, and recruiting are hot topics that someone with my background can write a few books on (if I didn’t already have a full time job actively supporting Oceans founders!).

For now, I’m going to hone in on two of the highest points of leverage to establish the foundation of your recruiting and talent strategy, which will ultimately solidify the foundation of your organization: “Always Be Recruiting” and “Recruiting is Everyone’s Job”. If your foundation isn’t set, you won’t be able to do the next 1,000 things you need to do well to build your company.

You’ve probably heard of the idea to “always be recruiting.” I think that there’s another level to it, and here at Oceans we like to refer to it as Relationships Over Reqs. You see, most companies recruit for roles as they discover they need it, which makes sense. Given all the competing priorities for time, I can understand how this happens—but it’s a mistake.

Here at Oceans, we work with early stage founders and their teams, helping them think through and hire their first external candidates, which is something most of them have never had the pleasure of doing before, especially if that role is a senior executive. People think it’s a moment in time: “we need X role and Y skillset so now we will start that process, and then that process will end.” The problem is that if you and your company are successful, it never truly does. The next role comes into view, and you start the process over again—rinse and repeat. This can feel a lot like you’re in the back of an NYC cab during rush hour: hit the gas, hit the breaks, more gas, more breaks. (Not great.)

In contrast, the behavior to establish early on is to always be recruiting. Especially as a founder, you should always be talking to great people whether you currently have an open role or not. This not only helps you continue to hone your message and pitch to candidates, but it also builds your EQ (Emotional Quotient, similar to IQ), on what candidates are currently looking for and expect out of their employers and future leaders/managers (that’s another book I could write!). This also inevitably builds the future candidate pipeline that you’ll use as your network for your next open role. It will help you move faster—and smarter—the next time you have an open role, because you started building that relationship with candidates already.

The Relationships Over Reqs recruiting method also prevents you from making decisions quickly based on too few people in your pipeline. People make the mistake of using the process itself to help calibrate what you need. This is how you avoid the common mistake of hiring a “C” player—because if you finally meet a “C” in contrast to five “D”s you just interviewed, that person looks pretty good and rises to the top. When in reality, it’s just you lowering the bar.

Essentially, the people faucet should never be turned off; instead, you’ve got to keep the water running so it’s always warm.

My current cofounder Josh Rahn and I were partners at Facebook for almost eight years. He was one of my team’s best hiring managers—and, in his words, this is why:

“For five years at Facebook, 15% of my week was spent recruiting and interviewing, and 80% of those meetings were for jobs not even opened yet. We were always recruiting, to build and learn and network. And it worked.”

As your company scales this gets harder, given the volume and variety of different roles that open, close…and open again. So doing this early is key! Here are ways you can activate today, regardless of size:

I am very lucky to have worked at some truly great companies in my career. I’ve been even luckier to work for leaders who inherently understood that it wasn’t just my job to grow the organization and hire great people; it was theirs as well. Everyone was accountable, from the executive team to the hiring manager to the most junior person at the company.

Google and Facebook (where I spent a collective 12+ years) were maniacal about having a fully entrenched recruiting philosophy driven throughout their respective organizations. It was the reason we were so successful as recruiting and people functions. Every employee was always looking for great people; every employee was passionate about hiring great people; every employee was focused on putting their best foot forward when meeting candidates. Teams and hiring managers were given goals on recruiting metrics: time to hire, feedback lag, progress to hiring goals, etc. We were all aligned, and teams themselves had mutual accountability. We were partners.

One of the best assets your team has to recruit great people are the employees themselves. When you have a great company culture, every candidate can see, hear, and feel that in every interaction they have throughout the hiring process. Every employee should be an ambassador for your brand.

Our founding partner Sara Barek lived this example just recently at one of her son’s soccer games.

“A friend and I were chatting about her work (which she didn’t love, and was looking for something new), and then she asked about mine. I was gushing so much about how much I loved working with my partners and supporting founders, that a mom I’d never met before came up to me. She’d overheard my enthusiasm and asked what I do and with whom, and lamented that her work situation wasn’t anything like mine and she was giving notice. She’s in a different industry, but she totally wanted in—I unintentionally had her on the line. Given how much time we dedicate at work, sometimes at the expense of our families, it’s a shame that so many people trudge through their days at work and don’t enjoy it. This woman has now become a friend, and our conversation helped her refocus her job search.”

Recruiting is not just the most important thing managers can do—it’s the most important thing EVERYONE can do. This knowledge should be woven into the fabric of your company culture until it’s instinctual. Turning every employee into a recruiter will help you and your team build a successful and thriving business. Making recruiting part of everyone’s job—not just when the company needs it, but all the time—will exponentially increase your odds of empowering your team to successfully scale as a unit. This is the real Power of Together.