On February 15th 2016, I left Facebook after nine years. It was the hardest decision I ever had to make, but in my heart it was time to move on.

In the year it took me to make that decision, my close friends at American Express lost Ed Giligan, their fearless leader whom I had the pleasure of meeting and being inspired by; my friend, boss, and mentor Sheryl lost her husband David; and a good industry friend Ari Bluman who I regularly golfed with was diagnosed with Leukemia the following week.

Each loss impacted me tremendously because the message was so upfront and personal: Life Is Short. Couple that with an upbringing of having divorced parents, and losing my dad when I was only 27 years old, it became crystal clear—albeit incredibly scary—it was time to make a change.

I had four goals when I left:

My friends made fun of me—I heard a lot of “Josh is retired!” And my sincere answer was that I was simply trying to get UNtired.

During that year, I made a lot of progress on my goals. But I’m simply not good at sitting still, and after about six months it was clear that I needed to find my next chapter. My mother’s family were immigrants and pathological entrepreneurs: chefs, contractors, land owners, and deal-doers deep into their 90s. My father was doing deals pretty much until his last breath. I had to accept that a happy Josh likes startups, bringing people together, and “making deals;” frankly, it was in my blood.

Then, on a cold, rainy Saturday, all three of my kids had soccer games across Brooklyn, Manhattan, and the Bronx. Finally we got home, soaked and freezing. I was DONE.

I heard one of my kids say, “Daddy can we watch a movie?” When we got to the couch, I saw that Noah had queued up Oceans 12. Perfect, I’m a professional sleeper, so I was out cold before the opening credits. Half an hour later I woke up and there he was, Elliot Gould, on screen looking exactly like a recreation of my dad. I started laughing. Then BAM! It hit me. 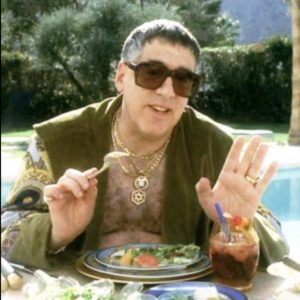 The kids looked at me like I was crazy.

“This is what I am going to do—Daddy is starting Oceans!”

Ella looked over, eyes the size of saucers, as excited as I have ever seen her, and said, “We’re robbing banks?!”

“No Ella,” I said, laughing. “I am going to build a team of the best in the business: leaders who complement each other, partner with each other, make fun of each other, and bet that their impact will generate huge returns. We won’t work for near term income, we will work for long term outcome.”  I smiled, put the movie back on, and promptly fell back asleep, surprising exactly no one.

I’ve been crazy before. I’ve definitely done the impossible a number of times, and since my son had recently told me I needed to get out of the house (as I was driving him crazy), I knew I needed to go back to work.

And then I called  Mike Lazerow. Mike’s my kind of crazy, and I remembered his video about not letting fear hold you back. He was the first person to tell me the idea was brilliant, and started calling me Elliot (and still does every once and awhile). It was a sign. 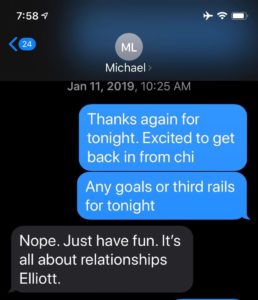 Shortly after, I spoke to Steven Rosenblatt, a dear friend who I’d cut my teeth with in digital back in 2001. I told him my dream. I also told him that I had no business model, but I knew there was a product market fit, as I had been supporting a number of founders and they were all in need of operational support.

Steven laughed at me out loud; I thought he was going to tell me I was a fool. “I’ve been working on this exact dream for 6 years.” Not only had he had the same idea, he had the makings of a business model and a level of insight into early stage venture that would be a perfect complement to my skill set.

He and I knew that all founders needed to learn how to hire, and especially needed to build world-class leadership teams; essentially, they needed support with PEOPLE. Luckily, I had just the right person. I started texting Glenn Handler, “You need to quit today.” His response was filled with expletives: “I’m in with Carolyn and David, leave me alone!”  Three months later, he took a meeting with us and (not) George and Elliot sold Glenn on joining the team, we found our (not Brad) and Oceans was off to the races building our plan, our team and our dream.