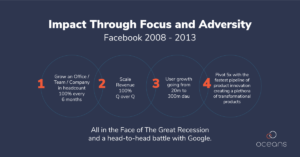 I joined Facebook in April of 2007. There were seven of us in Facebook’s first satellite office in NY. The rocket ship was starting to take off but it was 2008. We were an early stage darling and everyone was drinking the excitement kool-aid. We faced 3 major challenges that no other start up ever faced: The Great Recession, a direct attack from Google and the need to scale every facet of our business with minimal room for major errors.

Our management team was a bench 10 people deep at an early stage with the experience of building—at light speed—the biggest names in tech. This team consisted of the best in the business. Mike, Paul, and Tom had all been instrumental in building Ziff Davis, Yahoo, CBS Sportsline, and Univision. Sheryl Sandberg had built Google’s AdSense team with Gokul (aka “the Godfather”). They obsessed over focus with Mark and the engineering team to grow the company headcount 100% every 6 months, scale revenue 100% quarter over quarter, and pivot from banners to feed, desktop to mobile, mass reach to micro targeting, iO media buying to machine learning all in five years.

For Facebook to win, our skilled team needed to be a speed boat focused at all costs. In an effort to achieve that focus, velocity, and impact, we implemented a series of systems that can now can be applied to scaling any startup.

Monday – The Internal Meeting ONLY Day

Block Mondays for your team meetings. Give your people the ability to focus their work as a team as well as within the larger goal of the company. Here’s how we did it at Facebook:

The key is for each level to communicate up so by the end of the day wins, learnings, challenges, and business insights for the past week and plans for the following week are known and addressable by the entire company.

Utilize Fridays as the easiest way to implement an “always-on” recruiting strategy. Batching the interviews on one designated day allows you to apply maximum speed and efficiency to the process. Implement a system with a process for feedback and work with skilled recruiters to move fast.

“We went from 275 employees in 2007 to 12,000+ in 2016. I enforced the expectation of ‘always be recruiting’ and a system where every new hire was interviewed by 4-5 people. We said no 20 times to one. My process included creating a 3-5 hour block to accomplish it all in one day with a specific process for feedback. We made educated, unbiased decisions with confidence, quickly.” —Glenn Handler

When the going gets tough, the tough get going. With a lockdown, you force everything to stop and focus the entire team on the task at hand: competitive threats, product requirements, monetization issues. Whatever the challenge might be, leadership makes it everyone’s mission to solve and you dedicate that time to working together with no distraction.

There was a period of time at Facebook where we faced quite a few threats and Mark would call for a lockdown. Everything stopped. Everyone kissed their significant others and pets and said “I’ll be back.” Everyone focused on the mission, and we put the entire weight of the company behind solving that problem. Often lockdowns went on 24/7 for extended periods of time. It was almost always an engineering problem but being in monetization, we knew that we had to contribute. Even if you were not directly applying your skills to the problem, you were offering to babysit and bring in food for the teams at work. It was galvanizing to see everyone so damn focused.

PRO TIP: Even if this never goes into play, it is a good idea to outline in your on-boarding of new employees that this is a consideration so everyone is ready to move when needed.

What is a “non-goal”? Simply put, it is ruthless prioritization and recognizing what falls to the bottom of the list so all teams can focus on the most important goals at this moment. What’s crazy about this kind of focus is that non-goals can easily seem to be most important, most profitable, or most innovative. But creating non-goals helps make the focused work less personal and more binary because all teams need to be involved.

I am a certified impatient, easily distracted dreamer and have been since my youth. I first experienced this idea of non-goals when we had to make the difficult decision to push off the launch of Facebook’s ad network. Known as Facebook’s Audience Network, it is now a multi-billion dollar company with a leadership team that could run any top 10 tech company (including our friends, mentors, and partners Alvin Bowles and Andy Berman). This was a huge opportunity for Facebook even at this early stage, and we knew launching it was a monumental undertaking.

Sheryl stood up and pronounced that the ad network was a non-goal. And she was right. Even if it is the biggest thing the company is working on, it can be classified as a non-goal to have everyone focus on the more pressing matters at hand. By assigning the non-goal title to the ad network, we were able to ruthlessly prioritize. Any new dreamer ideas had to be bigger and better than the ad network.

Non-goals are what saved me, my bosses, and my team from countless distractions. Today I can’t stress enough that they’re something every founder should use.

PRO TIP: It goes unsaid after understanding what we had to do with this non-goal, always make sure the new ideas you are working on are better than the ones on the list.

Founders would not get to where they are today without focus—this we know. But this idea of focus on an elevated level is what will help you survive the challenges and emerge as a leader and the successful business you are so passionate about building today. Take time to understand these important learnings and implement focus before it is too late.